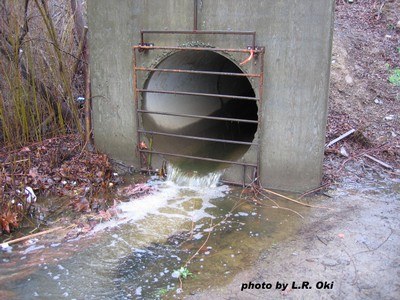 ly available, were found virtually year-round in storm drain water samples from eight selected California neighborhoods. The main ingredients of lawn and garden fertilizers were also found in the water samples at all sites.

A collaboration of researchers, led by Orange County Water Resources/Water Quality Advisor Darren Haver and University of California Cooperative Extension Specialist Loren Oki, have been conducting a multi-year study to characterize the run-off from single-family home neighborhoods in Northern and Southern California. Education provided to homeowners in the test neighborhoods is expected to reduce both the amount of run-off water and potentially harmful contents. Computer models of flows and loads will aid future urban planning. 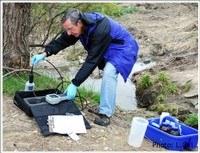 Four single-family home neighborhoods in Sacramento County and four comparable neighborhoods in Orange County have been the focus of this study.  Each site has storm drains that carry the run-off water from neighborhood yards to creeks, ponds, wetlands, or other open waterways.  Two of the sites in each county were chosen as experimental sites where outreach was conducted, and two were designated as controls.

Water sampling began in 2006 by collecting water at the storm drains during both the dry season and storm events.  Master Gardeners in each county have been invaluable in assisting program directors in collecting these samples and performing some of the on-site analyses.  The samples have been further analyzed by University of California labs for bacteria, excess fertilizer components, eleven different pesticides, and other parameters.  Flow rates have also been monitored throughout the day during the course of the year.

Eleven pesticides were found in the water samples from all sites in both counties throughout the year.  The pesticides for which the samples were analyzed are all ant control products.  These were chosen for examination as a result of a Department of Pesticide Regulation-UC Integrated Pest Management study, which found that over 60% of the pesticides that homeowners purchase are for ant control.  Nitrogen, phosphorous, and potassium, the main ingredients in most commercial fertilizers, were also found in all sites year-round.

Data loggers that monitored the flow of water from the storm drains revealed increases in run-off flows that occurred daily between the hours of 4 am and 10 am that were probably caused by over-irrigation.

What does it mean?

Bifenthrin, a commonly used pyrethroid insecticide, has been found in the runoff from all 8 sites, ranging from less than the limit of detection of 0.5 ng/L to more than 6,000 ng/L (nanograms per liter, equivalent to parts per trillion).  Bifenthrin is found in many home pest control products, especially those for ants and lawn insects. It is also used by structural and landscape pest control professionals. Depending on its concentration, it can be toxic to aquatic organisms including fish.  Bifenthrin breaks down more slowly than many other insecticides, with a half life in soils of about 120-180 days.  The median concentration of the chemical varied between the sites from 1.9 ng/L to 36.5 ng/L.

To understand the potential for environmental toxicity, however, it is necessary to look at the maximum concentrations from each site, not just the average. The highest concentrations from the Sacramento sites varied from 77 ng/L to 670 ng/L. Prior toxicity tests have established that half of a population of water fleas (Ceriodaphnia dubia) will die when exposed to a 100 ng/L concentration for 96 hours. The population of this species is considered an indicator of the overall health of an aquatic system. Additionally, a 150 ng/L concentration will kill about 50% of the exposed rainbow trout population.  Bifenthrin is also broadly toxic to insects, including bees and other beneficial insects, and can remain effective on foliage for up to 7 days. 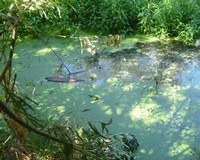 When a synthetic chemical enters a natural water system, it can upset the balance of the interdependent living organisms that contribute to the system. Fertilizers can cause some water plants to proliferate and use up the oxygen needed by fish and other water organisms. When this balance breaks down, it degrades the health and beauty of the rivers, lakes and oceans.

Researchers in UC Davis' Department of Environmental Design are creating computer models to make predictions of pollutant loads in run-off for urban areas before and after implementation of "Best Management Practices" (BMPs). Run-off volume and water quality data from our test sites are used to evaluate whether educational outreach can affect landscape maintenance practices enough to reduce run-off and its polluting constituents.

These models can be used by municipalities when developing policies for localized and regional planning by predicting run-off volumes and pollutant loads.

Master Gardeners have led the neighborhood outreach in two test sites in Northern and Southern California, promoting landscape practices that reduce water, fertilizer, and pesticide use to decrease polluted run-off.  Some of these events were limited to a small group of houses, such as a cul-de-sac, and some were neighborhood-wide and held at a community park.

Informational materials and training were provided to the homeowners on a wide variety of topics from installing and managing irrigation to controlling ants without polluting the water.  These Best Management Practices (BMPs) were developed into a set of Quick Tip cards with the help of University of California's Integrated Pest Management program, and given to the homeowners in the test sites.

Surveys were conducted by phone, mail, and door to door to evaluate the effectiveness of the outreach on homeowners' gardening practices.  The ongoing study hopes to show a reduction in both the amount of and the levels of pollutants in the run-off during the dry season and storm events.

Find these and other resources here

Front Yard Run-Off: Why Does it Matter?